Last night while watching Breaking Bad I was pondering the idea of Hank’s evolution as a commentary on crime fiction detectives.

We’ve seen him as a blunt instrument pounding his way to the answers (almost like a hardboiled kind of detective); we’ve seen him bed bound and more cerebral (think Ironsides or Lincoln Rhyme) after he had his his perceived masculinity stripped away; we’ve seen him in a Wire-esque mode trying to build the case piece by piece beause “all the pieces matter” (an old Wire saw); Up until last night he hadn’t left the house but was solving the case and having others bring him the info he needed (think armchair detectives like Nero Wolfe).

What writers are you wondering what happened to, or has it been too long since their last book?

-Theo Gangi – Bang Bang came out 6 years ago. A sequel, Kiss Kiss, was talked about but never came out (Theo, Snubnose would be interested, just saying)

-Allan Guthrie – I love Blasted Heath as much as everyone else does but his last novel was 2009! Too long Al, too long.

Who else should be added?

Broken River Books started announcing new titles on Facebook recently. I was already excited to see what they were up to and now I can’t wait to read what’s coming. I conducted a brief interview with editor J David Osborne.
***

Brian Lindenmuth: You don’t have much of a web presence, other that Facebook, is there a site coming?

J David Osborne: There will be a website for Broken River after all the titles are announced, and we’re a little bit closer to launch.

Why did you set up a small press?

When Jeremy Johnson decided to put Swallowdown on hiatus for a bit while he worked on his novel, I offered to take it over for him. I wanted to rebrand it as a crime fiction press. He told me that I could do that if I wanted, but that it was probably a better idea to set up my own. I talked to Cameron Pierce about it and he was nice enough to offer to help me. He’s done a great job at Lazy Fascist, and so I’m stealing that model.

How did you think you can add value in the current publishing climate?

I’m going to put out the absolute best crime fiction that I can. Also, I’m going to be taking books that other places might be scared to take risks on. I come from the Bizarro fiction scene. I want the outsiders and the weirdos.

Why become a publisher?

It’s quite possibly the only thing that I’m good at. Ever since I was little, I was editing my dad’s stories he’d leave up on the computer. Writing, reading, those things are pretty much my life. I’m extremely detail-oriented. I find true joy in the book-birthing process. I love getting the manuscripts in my inbox, I love reading them, I love building relationships and art. Also, I have worked a ton of odd jobs. I’ve moved furniture, trimmed trees, worked in a home decor store, a tire shop, Eddie Bauer. Now I manage a hot dog restaurant. I like to work for the sake of working, but I’d prefer to put my energies into doing something that I could potentially be the best at. I’m never going to be the best hot dog seller.

Who chose the name?

Cameron Pierce, just out of the blue. I thought, “yeah, that’s good.”

As a reader, how would you describe your taste in crime fiction?

I love James Sallis to death. Daniel Woodrell and James Ellroy are gods. But really, I’m a sentence guy. I flip for pretty writing. And I don’t mean the purple shit, I like it lean. I need characters first, bad stuff second. My biggest goal for Broken River is to put out books that leave a lasting impression. You’re not just going to read these books, you’re going to live in them, with these human characters, well after you’ve put them down.

As a publisher, how would you describe your ideal reader’s taste in crime fiction?

My ideal reader would be someone who’s willing to put in the work. A lot of these books are not what I’d call “beach reading.” They all rip along at a serious pace, but they require attention. They do not hold your hand. My ideal reader needs to be someone who does not want the same story over and over again. Some folks do, and I don’t blame them. But that’s not what you’re going to get, here. When a book from Broken River comes in the mail, I want them to sit down with it and take a deep breath.

Will you be publishing in print or E or both?

I’ll be doing both. I love my Kindle, but I’m hoping folks get the print versions. Matthew Revert’s cover work is a thing to behold.

How will/has this venture affect your own writing?

The books that I’m putting out haven’t affected my style as a writer, so far. What they have done is affected how I read. I’m becoming a better reader. My first worry when I started this thing is that I am picky. In my writing every word needs to have a purpose or I’m cutting it out. But I’ve learned from reading and rereading these titles that my first impulse to cut needs to be curbed ever-so-slightly. I have to let the book breathe and I have to trust that these wildly talented individuals I’m working with know what they’re doing.

You just recently announced your first title. Tell us about it.

The first title I’m putting out is THE LEAST OF MY SCARS by Stephen Graham Jones. Jones is maybe one of the best, most prolific writers putting in work today. I’ve been a fan of his since one of my college classes had his LEDFEATHER on the syllabus. Every book he puts out is different, and powerful. It’s kind of difficult to believe, that this is just one guy. SCARS is about a serial killer who is confined to a apartment in an abandoned complex and fed victims by a mobster. The isolation and paranoia slowly dismantle this already unhinged man’s psyche. It is a fully realized portrait of insanity. It’s a tough book both due to the extreme content and the casual way in which the killer relates his constant urge to do all manner of terrible things to people. It’s an extremely evil noir as told by the villain of a slasher film.

You just recently announced your second title. Tell us about it. 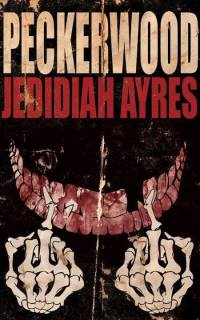 The second book is PECKERWOOD by Jedidiah Ayres. Ayres knows crime fiction like no one I’ve ever met. You can feel the confidence in the way the book is structured. The man can weave a web and he writes about horrible people with a level of empathy that is just totally missing from most contemporary crime fiction. It’s amazing to me when you read a book and only realize in hindsight that the characters you were joking around with are actually heels. The novel chronicles the collision of a meth-dealing ex-biker, a crooked cop, and a penny-ante douchebag. While not terribly long, it is epic in scope, and I’ve heard whispers from the author that there’s a sequel in the planning stages. I wish I didn’t know that, because waiting for that one is gonna be tough.

What else do you have coming up that you can tell us about?

I’ve got a couple more books that I haven’t announced yet. I’m going to put out the sequel to LOW DOWN DEATH RIGHT EASY and the serial novel I’m writing online, GOD$ FARE NO BETTER, early next year. Also, the thing I’m really excited about, is the anthology I’m assembling. It’s called INCOGNITO. The premise is as such: not a single author will be named in the book, and each one will be sworn to secrecy. No one will ever know who has written these stories. I got tired of seeing the “no pay, but exposure” bullshit for anthologies, so I kind of flipped it: a hundred percent of the royalties will go to the authors. What kind of exciting writing can I find when there’s no need for an author to worry about his or her name brand? From what I’ve seen so far, I’m extremely hopeful.

Are you open for subs? If someone’s reading this who has a project that might be a good fit for you, how would you prefer them to go about submitting it?

Anyone with a badass book can submit it to brokenriverbooks@gmail.com. Door’s open for the time being.

Lastly, what is noir?

Noir is feeling you get when you find out your best friend kills cats and you realize you love him anyway.

What is Palomino Mugging?

First, it is intended to be a spiritual successor to Bill Crider’s blog, Bill Crider’s Pop Culture Magazine. Bill’s blog was like a personalized RSS feed of interesting things, interspersed with reviews and other writings. That’s the approach I plan to take.

Second, I’ve written a lot of things at a lot of different places over the years. I hope to bring the bulk of my writings from over the years under one roof.

Related, I’ve had a large number of blogs, social media accounts, and Tumblrs. Some started on a whim, others with a very limited or specific focus. I plan on bringing all of those under one roof.

Third, I love social media but it doesn’t work well as a place holder or a book mark to remember something because it’s not easily searchable and older stuff can be hard to pull up. Things posted here should be easier to reference.

So, I will be using this space for my misc. thoughts; things I find that are interesting; music I like, whatever. In other words very much random stuff.

Palomino Mugging is a reference to something. Got a guess? Let me know.